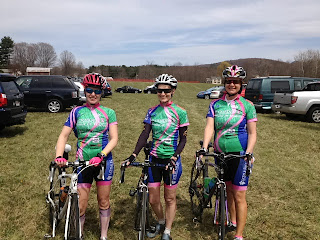 Wow!  My first road race and my first bike crash all in one—talk about getting schooled!


It was such a beautiful day—perfect.  I was with Kathleen and Barb in the last group to go at 2:40 and we had just gotten out of the 1k neutral mode when somebody crashed right in front of us.  I thought I was going down too—it was a lot of scary braking and swerving around girls on the ground—and I didn’t crash by sheer luck.  When I finally stopped I saw Kathleen over on the side of the rode, up on the hill, flat on her back (one medic said she won the prize for longest hang time!).  She was conscious and talking but not moving, with bad pain in her head and neck.  Her husband had just finished his race and was parked right next to my husband in the main parking lot so I was able to get him on the phone and he got over to Kathleen before the ambulance got there.


There were about seven other women down in the road and there was lots of blood, moaning and crying.  (One of the medics told me that my cortisol levels would be as high as if I had actually raced.)  Three of the riders were taken away by ambulance (including Kathleen) and the rest went to the field hospital.  Kathleen was a total trooper.  She talked and was in good spirits the whole time as they put her in the ambulance.  She even joked about what the emergency room staff would think the smushed Snickers bites were in the pockets of her jersey!  Anyway, she got out of the hospital later that evening with only a sprained neck and no concussion, so that’s great news.  And she was already talking about being at the BCR.


I’m really disappointed we didn’t get to race (I  had 3.8miles on my odometerL) and, I have to say, I’m feeling a little gun shy about getting in a group again.  But I’m already thinking about next year’s Battenkill…it was so beautiful and the set-up was so friendly and professional.  Also, the responding medics were dynamite.  Hope not to need them again.
On a positive note, Barb was able to miss the crash completely and finish the race triumphantly for all of us!

As an aside, the future of Upstate NY racing had a chance to "Ride with the Pros" on Friday night. 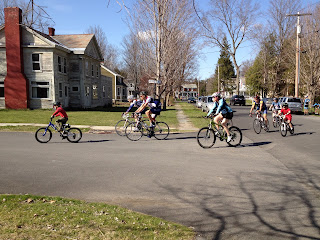 My seven year old got the experience of leading out the peleton. 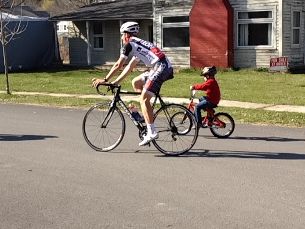 My five year old didn't realize that he is any smaller than this guy (and thinks there is really a chance to beat a pro!). 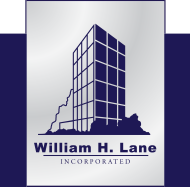